2.    There are 92 seats reserved for hereditary peers.

3.    If a peer would like to stand in one of the by-elections they need to be on the Register of Peers. There are currently 210 peers on the Register, all men save one women, Baroness Dacre.

4.    There are approximately 2,200 peers and baronets. Some of these have many titles which all follow the same rules of inheritance, with exception.

5.     Male primogeniture was changed to absolute primogeniture in 2013 for the Royal Family. A report on the rules of royal succession was prepared by the Political and Constitutional Reform Select Committee of the House of Commons, chaired by Graham Allen, and was published in December 2011. The report drew attention to “the continued ineligibility of women to succeed to the majority of hereditary peerages, which remains a matter of public interest for as long as it has an impact on gender balance in the House of Lords.”

6.    In recent years there have been Private Members Bills in the House of Lords from Lord Diamond (Hereditary Peerages Bill 1994), Lord Lucas (Equality (Titles) Bill 2013) and Lord Trefgarne (Succession to Peerages Bill 2014/16/17) all of which have failed to get past the second reading.

8.    There are 450 elder daughters of peers and baronets currently unable to enjoy equal inheritance rights as their brothers. 49 hereditary peers currently sitting in the House of Lords, more than half of the total number, have elder daughters, only daughters or sisters who are unable to inherit and therefore participate in the same political process that they themselves are part of. 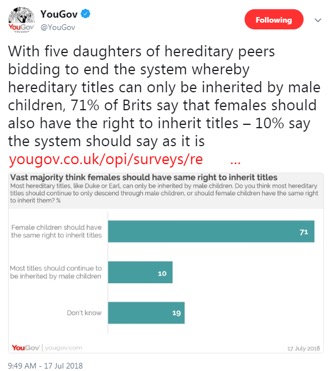 12.  The case challenges the Government over what we consider to be a breach of the European Convention on Human Rights, namely Article 14 which specifically prohibits discrimination based on “sex, race, colour, language, religion, political or other opinion, national or social origin, association with a national minority,property, birth or other status.” And Article 3 of First Protocol the ‘the right to regular, free and fair elections.’

13. There was precedent in 2009 when two individuals (Messrs Sejdic and Finci), one of whom was Roma and the other Jewish, succeeded before the ECtHR after they challenged a pre-condition that they belong to a specific category of citizen (Bosniac, Croat or Serb) in order to stand for election to Parliament.  The ECtHR found a violation of both Article 14 ECHR (taken together with Article 3 of the First Protocol 1) and a violation of Protocol No. 12. Although the express wording of Article 3 provides for each member state to ‘hold free elections’ the ECtHR held in Sejdic that it is capable of a wider interpretation.  In Sejdic the claimant’s ineligibility to stand for election to the House of Peoples was found to fall within the scope of Article 3.  This was despite the fact that the House of Peoples was a largely appointed Chamber but nevertheless one with a wide range of legislative powers.

14.  The European Convention on Human Rights(ECHR) is an international treaty to protect human rightsand fundamental freedomsin Europe.  All Council of Europe member states, including the UK,are party to the Convention (The Council of Europe, founded in 1949, is an international organisation whose stated aim is to uphold human rights, democracy and the rule of law in Europe). The Convention established the European Court of Human Rights(ECtHR). Any person who feels his or her rights have been violated under the Convention by a state party can take a case to the Court.  Judgments finding violations are binding on the States concerned and they are obliged to execute them.

15.  In 2010, the Country Landowners Association announced its 36,000 members own about 50% of the rural land in England and Wales. A significant proportion of the CLA members are men and with the powerful tradition of leaving property to men it is reasonable to assume that most of this land is owned by men. The remaining 50% is owned by the Crown Estates, the Forestry Commission, Ministry of Defence, National Trust, RSPB, overseas companies, other government departments, Network Rail, Highways England and Section 31 declarations. Scottish Land and Estates says 432 land-owners own half of rural Scotland, most of these land owners are members of the Scottish Land and Estates and according to them, are men.